Posted on August 10, 2017 by bloomingdale history

In this summer of 2017 as we prepare for the solar eclipse on August 21, a recent reference to the 1925 eclipse in The New York Times and the importance of our Bloomingdale neighborhood inspired further research.  This event, known as the Upper Manhattan Eclipse, did not occur in the heat of summer, but on a freezing, cold day: January 24, 1925.

Predictions of the path of a solar eclipse were pretty accurate by 1925, but not perfect.  Ancient societies—including the Babylonians, the Chinese, and the Maya—had developed the ability to predict solar eclipse patterns, but it wasn’t until 1715 that astronomer Sir Edmond Halley made his critical breakthrough, using Isaac Newton’s law of gravity. This achievement enabled predictions of exactly where the eclipse would occur and how long it would last at that point.

Astronomers had predicted that the total solar eclipse in January 1925 would travel across the U.S., and the edge of the “total darkness” would hit the west side of Manhattan around 72nd Street. Everyone north of this edge would experience total darkness, while those south of it would be in the “partial” area, just as all of New York City will be this year.

However, as the 1925 eclipse proceeded, and reached totality at 9:11 AM, the edge turned out to be somewhere between West 96th and West 97th  Streets. Scientists had learned something new and added to their knowledge base. Pundits named it “The West 96th Eclipse.”

There was the usual preparation for this event in 1925 —- the news warned individuals to look at it through tinted glasses, a bit of exposed film, or even a broken piece of dark blue or brown glass. The greatest new efforts appear to have been the need to get up high in an airplane. News reports of the day reported that the 25 airplanes that took off from the Army Air Corps’ Mitchel Field on Long Island.

Another exciting feature of the day was the U.S. Navy’s airship Los Angeles which they brought to Lakehurst, New Jersey, and flew out over Montauk on the morning of the event, loaded with cameras, telescopes, and 42 people. Here’s short film of that event: https://www.youtube.com/watch?v=l7XPjfCaltw

Many spectators went up into the city’s skyscrapers, hoping to get a viewing post above ground. The Woolworth building opened their observation deck early. Although it was a Saturday, this was still a workday for many, and even the New York Stock Exchange was open, although with a delayed opening that day. Passengers on ocean liners in the harbor crowded the decks in the cold morning air.

Uptown, students crowded onto the Columbia and City College campuses, and others headed for open spaces in Central and Riverside Parks, and further uptown in Washington Heights. Many people must have been ready to just stay in bed on this Saturday morning, since the temperature was at just nine degrees, and a record-breaking 27 inches of snow had blanketed the city days before. (That record wasn’t broken until the 2011 snowstorm.) 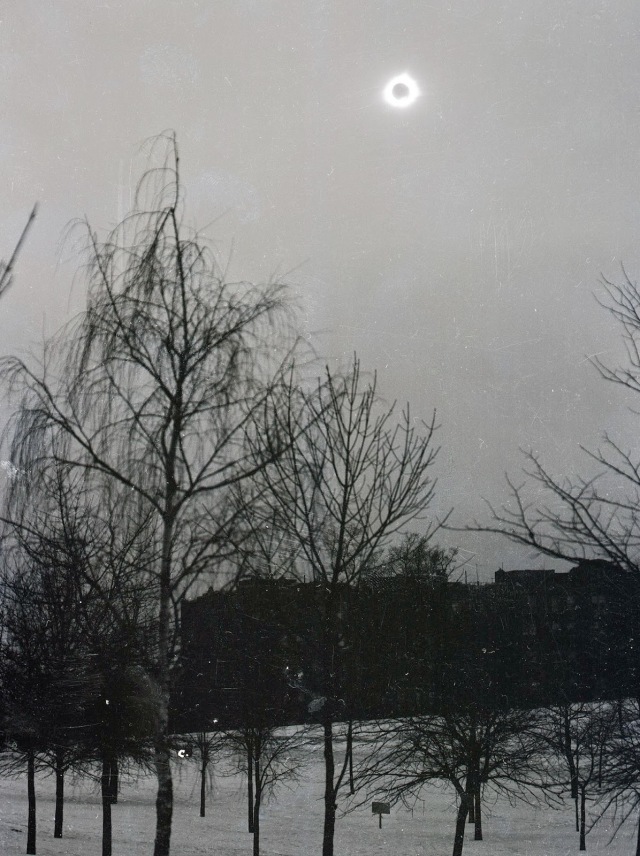 On January 30, 1925, the Jewish Chronicle of Newark printed a thoughtful piece: “The Eclipse From a Moral Point of View” marveling at the work of scientists to gain every possible bit of information from the memorable event, and urging people to respect the precise methods of the scientific spirit in a world where wild rumors, malicious gossip, and subtle propaganda can often replace durable truth—something to remember this year also!

On March 7, 1970, in the mid-afternoon, there was a 96% totality solar eclipse in New York City that West Siders may remember, as many people gathered in Riverside Park to experience it. This one was made especially memorable as it was the first to be broadcast in color. (The first televised in black and white was in 1950.)

West Sider, Carly Simon, may have been inspired by this event when she wrote her hit “You’re so Vain,” singing “you flew your Lear jet up to Nova Scotia/to see a total eclipse of the sun.”

Other newspapers available on www.genealogybank.com.

Group of neighbors interested in the history of the Bloomingdale area, approximately West 86th to West 110th Streets, Park to River.
View all posts by bloomingdale history →
This entry was posted in Uncategorized. Bookmark the permalink.